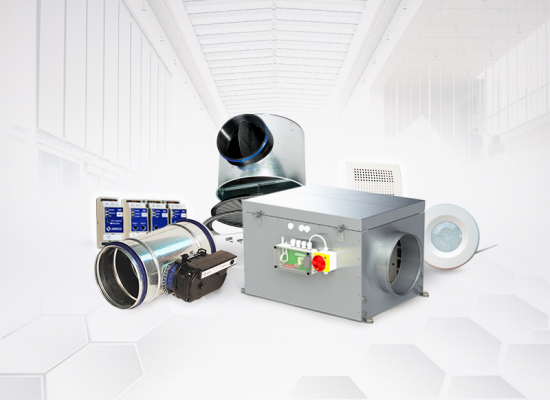 The VMX is a unique intelligent ventilation system for the non-residential sector (restaurants, schools, offices, meeting rooms…). This system is easy to install both in the new built and the refurbishment buildings. The VMX automatically modulates the ventilation on the basis of information received from the detectors that measure CO2 concentration, movements or detect presence. Thus, the air supply and exhaust flow rates are then matched to the true needs of the rooms functioned of the occupancy, reducing thermal losses and optimising electrical fan consumption. The VMX system is an affordable solution conciliating energy performance, indoor air quality and acoustic comfort that enhances rooms’ occupant comfort.

Maintenance is light and easy: reporting of information about the condition of the system with an interface of control.

Thermal, aeraulic and acoustic comfort for the occupants.

Savings on the electrical energy consumption of the fans.

Energy savings on heating or air-conditioning.

Proven reliability, with thousands of systems already sold in France.

System simple to install: only two wires on most of the components.

Open and open-ended system: it can be connected to other external devices or to a BMS.

Premises in non-residential buildings are characterised by highly variable and intermittent occupancy. For example, meeting rooms are generally used for a few hours and their occupancy is quite variable.
Classrooms are completely empty during recreation periods, lunch breaks and vacation periods. The VMX, with its smart ventilation, is well suited for the non-residential sector and allows an optimal management of ventilation flow rates according to the occupancy of the room.

This system yields large energy savings by reducing airflow rates by 25 to 75%, on average, depending on the reference flow rates.
Thanks to carbon dioxide or presence detectors placed at different locations in the room, the flow rates are managed strictly according to the needs. This avoids both over-ventilation, which would mean higher energy consumption, and under-ventilation, which could have negative impacts on the health, concentration, and comfort of the occupants.

With its different sensors, the VMX optimises indoor air quality by adapting automatically its ventilation to the needs of the room. If, for example, a room is highly occupied, the indoor air will be charged with CO2, humidity and odours emitted by the occupants which can result not only in discomfort and inconvenience but also in decrease of concentration. The VMX system, thanks to its sensors, will detect the occupancy rate and instantaneously activate the ventilation evacuating vicious air, bad odours and allowing new fresh air in the room.

VMX system offers the possibility to measure three types of information through three detection modes: the “Presence” mode, which adapts the ventilation according to the detected presence. The “Movement” mode, which induces a ventilation rate proportional to the number of movements measured. The “CO2” mode, which adjusts the airflow proportionally or binary (minimum / maximum) to the CO2 rate.

EXAMPLE OF VMX CONFIGURATIONS ON A ROOM 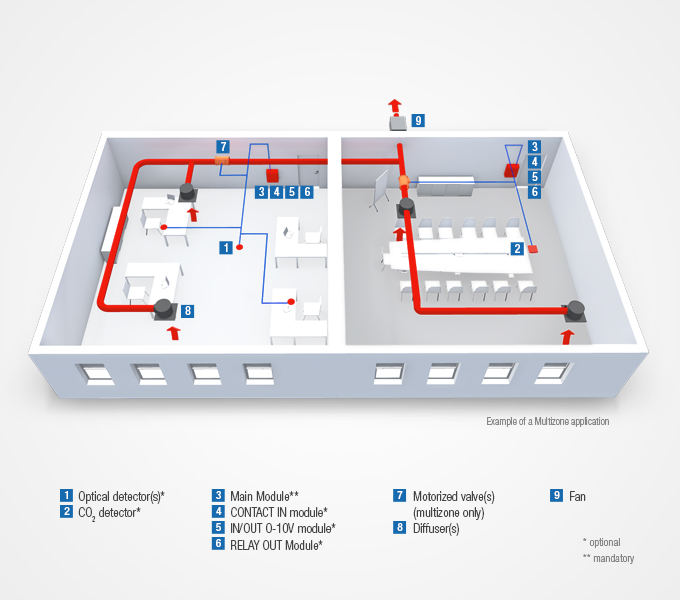 The VMX system is an intelligent system which can be fully configurated according to needs thanks to its several components (see next page). These elements can be adapted to most types of equipment commonly used for ventilation. They can also communicate with the majority of external systems (to provide information or to comply with instructions).
The VMX system can fit the existing ventilation network and has 2 ways of managing ventilation: “Unizone” or “Multizone” approach. 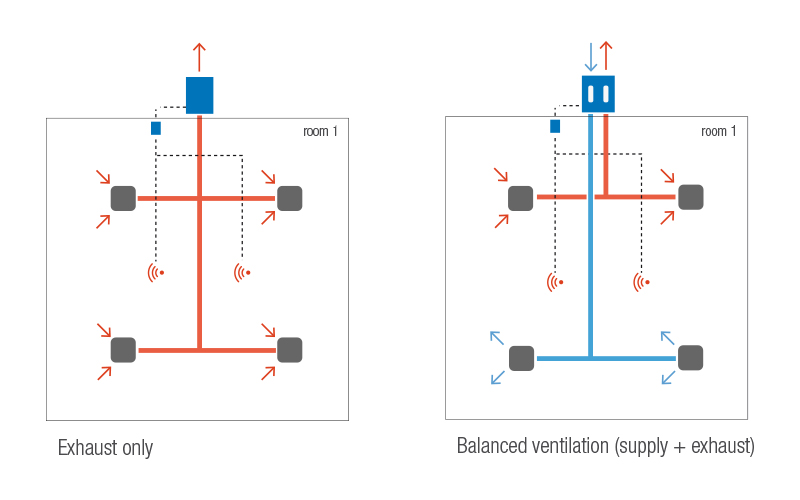 In a Unizone installation, the VMX system manages and controls the ventilation flow rates centrally, at the fan. This generally assumes that one fan is installed for each room. The detector in the room measures a parameter (CO2, presence, movement, etc.) and sends a signal to the modules that control the fan to vary the airflow rate and thereby ensure optimal indoor air quality.

In a Multizone installation, the VMX system manages and controls the ventilation flow rates in a decentralized manner, on the motorized valves. Several valves and diffusers are connected to a single fan, which can serve one or several rooms. A single fan serves several air supply or exhaust valves and diffusers, located in a single room or in different rooms. There is generally one VMX system (one MAIN module) per room. The detector(s) placed in the room measure(s) various parameters (concentration of CO2, presence, movement, etc.) and send signals to the modules that control the motorized valves (opening or closing of the flaps in a specified time) so as to adapt the airflow rates and thereby improve the indoor air quality. 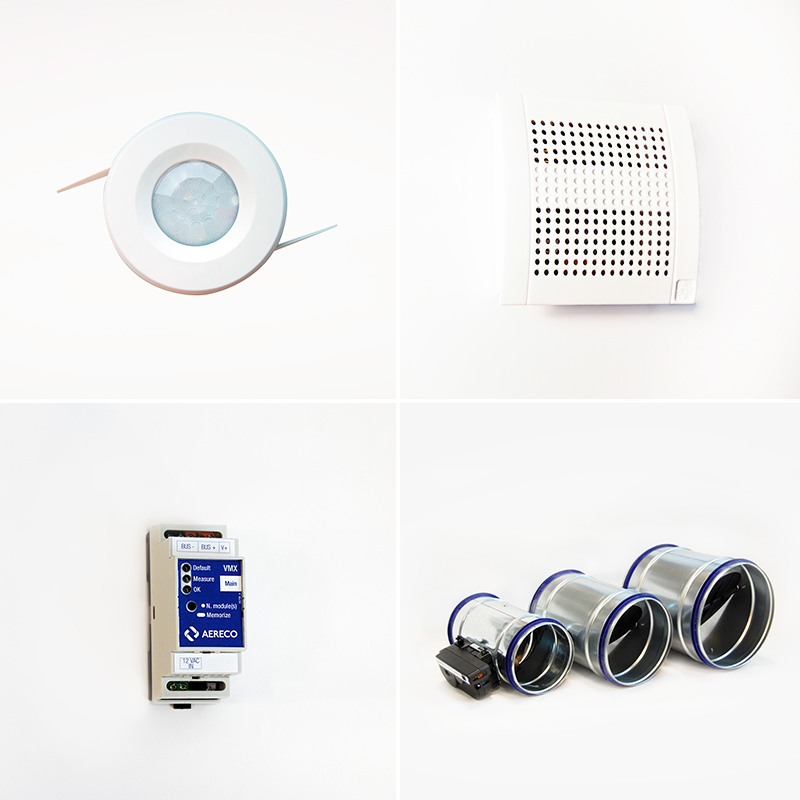 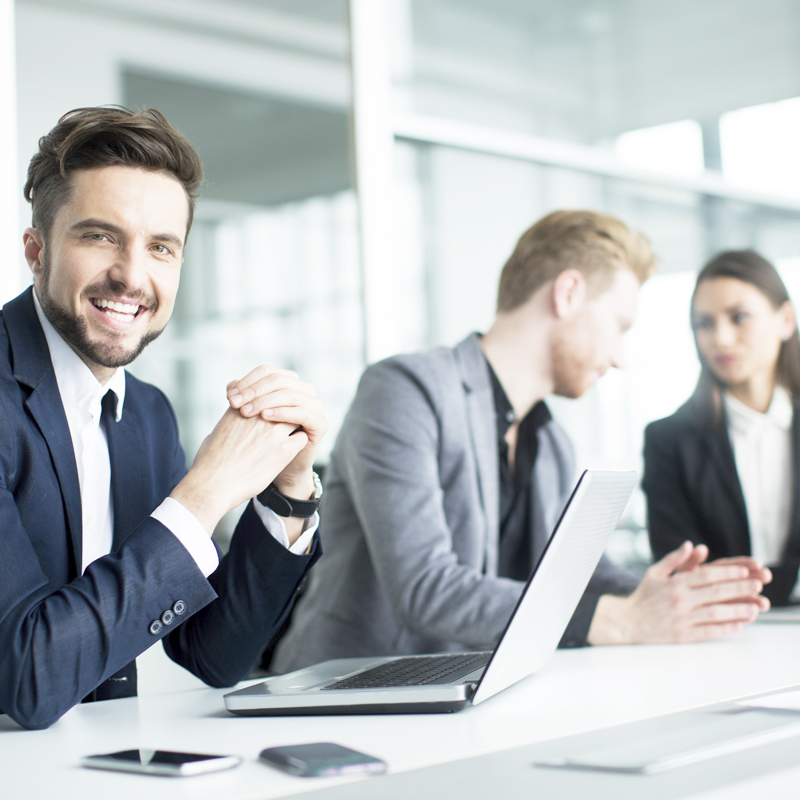